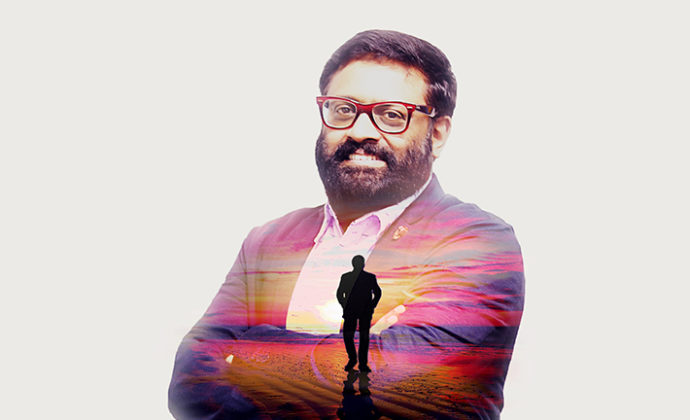 The Accidental Entrepreneur & His Journey

I am from a middle-class Bengali family. Until I opened my own firm, having my own business was nothing more than a daydream. The one universal truth about Bengalis is that they don’t know how to do business.’

Bengali Entrepreneurs are a rare breed.

This scene from a Satyajit Ray classic movie ‘Jana Aranya’, actually shows my shift from being a salaried person working 9 to 5 to being an entrepreneur.

Here, one character (a businessman and entrepreneur played by the late Utpal Dutt) explains the spirit and freedom of being an entrepreneur to another character (the job searcher played by Pradip Mukherjee). The latter has been desperately roaming the streets of the city for a job over a year.

It took me 7 tedious yet productive years to shift from the warmth of Kolkata to the toiling life in Mumbai. The shift to the ‘city which never sleeps’.

My struggles hadn’t ended, but had just begun.

I joined a renowned company and I got a good position. But the disappointment soon dawned upon me. It was like being back to square one. I used to face the same scenario when I was working in Kolkata. Everything was about power and position. There was no depth of knowledge. A sense of uneasiness began to crawl into me. Meanwhile, living in Mumbai was simply unaffordable. Mumbai took away all of my savings. It was hard to make a living even though I had a job.

I had resorted to working as a freelance consultant on the pro-bono format on weekends. I used to fly on the weekends to see and meet different clients in different cities. On weekdays, I would get back to my office desk. Funnily all these struggles and frustrations never de-motivated me. Instead, these gave me the strength and the confidence to become what I am today.

As I always say, “If you sacrifice, you win”.

Mumbai is a fascinating city. The thousands of people who come down to this city every day come here to do something better with their lives. But very few succeed. This is because not everyone is driven by three most crucial things: passion, dedication and sacrifice. This was the first lesson I learnt in Mumbai.

This is one of my favourite songs – very close to my heart.

I relate to this song, because the first time I saw the skyscrapers and the unimaginable luxurious houses in Mumbai, I was dumbstruck. I was struggling to make a living, and I couldn’t imagine how I would ever establish myself in this city, given all its brutality and cutthroat competition.

Ten years passed while I was trying to make sense of work and life.

In the summer of 2017, I decided to quit my job and start my own company. My own digital business consulting firm. It was a risk I was willing to undertake now, after 27 years of the same rotten, corporate atmosphere. My mission was always to build a company most respected across the globe.

I was now ready to build something out of nothing.

Long before I had thought of opening my own company, I had been establishing my credibility through individual consulting I had been doing on weekends. In those times when life was treating me harshly, I happened to come across a book named ‘Inbound Marketing’ by Dharmesh Shah. I read it cover to cover and was at awe with how drastically the marketing trends had changed. I realised the age-old methods were not enough to produce the desired results for businesses.

The book made me confident enough to open my own consulting firm.

I started my company out of my living room.

When I attended conferences or seminars or went for client meetings, I realized that I had to have a business card. It looked very rude when I was not able to reciprocate the same action when somebody gave me their business card. Thus, I thought I had to get it done as soon as possible.

To have a business card I needed to have a logo, a website – something that authenticated the existence of my company. This is when I started searching for a website name. I had to build my dream company and I wasn’t ready to compromise in any way. One of my friends had recommended that I keep yellow as the primary color of my business venture. So, I was toying with the idea of calling it ‘Yellow Consulting’.

I knew I would have to work really hard to establish and communicate the difference between an advertising agency and a consultancy firm. In India, clients don’t get the difference!

This movie scene depicts my struggles and the dilemmas I faced even before becoming an entrepreneur. The very thought of fetching capital and other issues such as the risk of failure stopped me from venturing out into the world of business.

Before any of you scroll further down, let me tell you, this blog speaks of the toils and all the ugly things of life without which success is inevitable.

I never intended to have my own business until I witnessed serious gaps in the most celebrated industry professionals. I felt compelled to think of an alternative way to educate businessmen who needed help and also to think of making a living out of educating them.

Their egos kept them from seeing anything beyond what they knew. If anybody challenged their outdated knowledge, they would misuse their power to overpower anybody and never accept the fact that they are lagging behind in knowledge.

But how? That was the question that hung in the air.

I was still working in Kolkata when for the first time I was given an opportunity to speak at a forum in the year 1996 hosted by a renowned global foundation, all without payment. This non-payment of any honorarium did not de-motivate me: in fact, I felt keener to impress them with the value I could add through my sessions. I wanted to do away with the transactional relationship that every other person follows.

I have always been an avid reader. In my days of struggle, I couldn’t afford to buy new books. What I could afford were second hand, rented books from the footpaths of Kolkata. I always wanted to be better than I was at the present.

The only reason why I searched for knowledge was to upgrade myself. To keep myself ahead of the industry.

I always looked for one opportunity and I knew I could make something or the other out of it. I believed in myself. I thought that maybe the hub of all corporations, the city of Mumbai could give me the work I wanted, some sense of job satisfaction and the recognition that Kolkata never gave me. This was because I knew I had the potential. Yet I was getting nowhere.

All I had wished for then was just one chance.

2001 was the year when I first landed in the city I had always dreamt about. I had come for a short period for an office project, but overstayed for 6 months. After going back to Kolkata, I realized that come what may, I had to build my career here in Mumbai.

As I went through the domain name selections, I was disappointed again. There was an existing consultancy with the name Yellow. After some hundred cups of coffee and several sleepless nights, the perfect name struck me. I typed it without wasting a quarter of a millisecond. It was available! I bought it instantly. The Digital Fellow – that was going to be my company name.

The name of the company now came into existence but that didn’t mean I could rest. To put a website together requires immense hard work of design, content, coding, and functionality. An unending list of tasks popped up in front of me. I was up for the challenge.

The first thing that I needed was a logo for my website. With my unique website name, I didn’t want a logo with any sort of normal, over-abused design. It had to be unique like the name of the company.

I started sketching. While I sketched and filled my trash bin for the days that followed, I looked for inspiration over the Internet until I found this and sketched it right away in my sketchbook.

This more or less gave me a feel of what I wanted my logo to be like. But there was something missing. I couldn’t well figure it out. A lot of brainstorming went into the process of logo making and sketching until I finally came up with the idea of portraying myself as the face of The Digital Fellow. That was when I began sketching myself.

Personification in the logo was needed. The logo had to communicate the values and ethics I was building with my company. It had to uphold all the things I personally believed in.

This has been the first ever sketch video that I had sent my gem of a designer to portray it on the digital software.

Now, before my sketches could be portrayed in the actual digital software, I had to get the color family right. The colors and what they should communicate to my audience had to be decided. But which colors and why? These were the next big things I had to get right. The next thing to do was: primary and secondary research for brand architecture. The goal was to get my brand identified the way I wanted it to be identified. This was a very tedious process. Any creative output, has to be supported by data and this was exactly why I pushed myself really very hard.

The procedure I followed to make my brand Identity:

This whole procedure helped me choose the right words for my brand that would go on to define it for the years that were to come. People would know what my brand stands for by reading these words.

Now was the time to finalize the colours.

The colors had to be in accordance with my brand’s personality and culture. Most importantly, they had to be in line with my personality. I dug deep and thought of all the cult brands and how they had come into existence to make it big. I studied a lot. I made use of Aura Shashtra, an age-old discipline which determined the colors that favoured me and decided the color combination on which the designs for the website were to be made.

The color selection was an overwhelming process. I had to leave no stone unturned. Aura Shashtra had helped me in choosing the colors that were exactly in accordance with my zodiac. I also took help from the age-old  Chinese tradition of determining the Yin & Yang for my website colors.

I matched the data that I got  with the chakras with color psychology to get the exact shades. I didn’t want to go wrong in making my brand and color played a very important role.

The first ever color palette for the website of The Digital Fellow.

This marked the start of a fabulous journey of knowledge and of empowerment of many inexperienced yet skilled individuals who joined me further and helped me grow the company.

You should not miss the top-performing blogs of the month: How April fool’s Day Gave Birth To thedigitalfellow and How to Pick the Right Digital Marketing Agency for Your Business

How to Pick the Right Digital Marketing Agency for Your Business