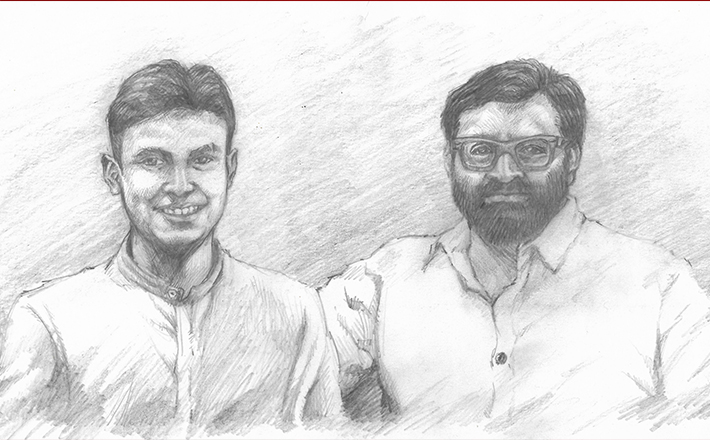 Things to Learn From This Digital Fellow

Susanta’s arrival was like the scene from Harry Potter, in which he stole the flying car to get to Hogwarts – a place he always called his home.

I had worked with his older brother years ago. He had introduced Susanta to me and approached me for helping him out. Susanta was searching for a job when I was taking my own big career leap in shifting from Kolkata to Mumbai.

Susanta was then a kindergarten teacher: he knew only one thing and used it to his utmost strength – HARD WORK.

After we had been introduced, Susanta went on sending me morning and night greetings on a regular basis on Whatsapp. Occasionally that message had one more question to it. “Do you have any work for me, Sir?”

This went on for about 9 months.

I was then in Mumbai, still trying to figure out my entrepreneurial venture and I was engrossed in many other things.

One night, while I sat at my work, my phone beeped. It was the same night wish from Susanta with the same question. But this time I immediately replied, “Okay. Board the next train to Mumbai.”

To my surprise, he stood there before me exactly after 36 hours. Susanta had finally come to Mumbai.

No questions asked. No demands made.

He had no idea of where he would stay, what he would do, how he would even provide for his food. It was only trust.

Susanta’s certificates were not enough to help him know what I was trying to build. He didn’t even how to use a computer!

In those days, I used to dream about opening a school imparting education on Digital Marketing. At night, I would learn my lessons and then provide Susanta with notes to make content out of them. He worked relentlessly for 17–20 hours a day on a broken, pre-historic Macbook I had managed for him.

This person stood stoically beside me when I had neither funding nor fame. He worked with me a hand in hand when I had nothing.

He stayed in the servants’ quarter which I had managed to arrange for him. He didn’t complain.

When I felt that things had started to fall in place, I rented a space in a co-working area and offered him the first seat in the cabin because he deserved it more than I did. He made sure he was learning constantly. He passed all the certifications that I required him to.

This marked the rise of Susanta, my Man Friday (from Robinson Crusoe).

Things that one should learn from Susanta:

Susanta never saw anything I asked him to do as painful; he welcomed the journey to the forming of a company.

He belonged to a well-to-do family but he didn’t mind staying in the servant quarters. No attitude gets to him ever.

He was like a hungry predator whose prey was only knowledge from everywhere and anywhere possible.

He believed in my belief.

First I had thought, he was only fit for a clerical job, but he proved me wrong. He became the first soldier of The Digital Fellow.

My man FRIDAY didn’t give up on me when I was struggling. He blindly supported me and stood there strong, as my pillar.

When we were in a mess and couldn’t afford lunch, Susanta would bring us bananas that we ate sitting in my car (sounds hilarious, I know!).

In those days of endless struggle, he never let me stop dreaming and neither did he stop. His optimism was a great source of motivation for me and was enough to keep me going.

I knew I had someone who believed in me, no matter how unrealistic my dreams and my ambitions seemed.

Luck was not on my side. I was hospitalized. I stayed in ICU for about 5 days, and every time I opened my eyes, everything was a blur except for the familiar silhouette that stood there beside my bed constantly, waiting for me to wake up.

He has been my BROTHER, my support. Susanta has shown me what it is like when a human being decides to be caring and affectionate.

Things he taught me:

Vision and clarity are crucial for working right.

There would be no will to work without optimism.

Faith closes one door, but soon opens another.

One must be truly practice what one believes in.

He dreams big. He keeps his chin high even on the cloudiest days. He is full of hope.

He is the only guy who speaks to me sarcastically and the funny part is I don’t even mind because I know that whatever he says is for my well-being.

It is said that behind every successful man there’s a woman. But I say, if you want your idea to be successful, you’ll need a Susanta.

After we built The Digital Fellow on 1st April 2017, he became the mentor and coach for the interns who came to learn and work.

Such men are rare. Susanta is a different breed. I thank his parents for making ‘Susanta’ possible.

He dreams of owning a BMW by 2025. I will be more than happy to make his dream come true, and as he always says, I hope for the brighter side!

Being a voracious reader himself, Susanta is a social media enthusiast along with being a crazy dreamer. Presently he drives our (The Digital Fellow’s) brand road-map.

This journey of building The Digital Fellow was quite memorable and only because of this one special person.

Susanta, this blog goes out as a tribute to all your hard work, unconditional love and unmatched sacrifices.

Thank you for being my rock.

Things you did not know about the Golden Ratio