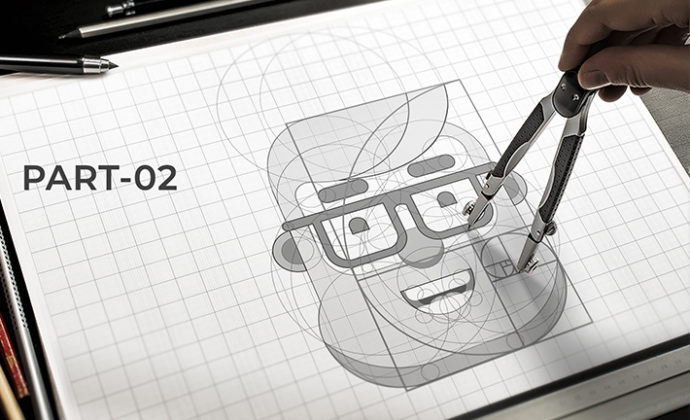 Things you did not know about the Golden Ratio

The human brain is a complex structure. We see things that are logic-based and that make sense to the brain. Gestalt psychology explores our cognitive behaviour. Designers borrow from its study of perception and visuality, especially the theory that the whole is greater than the sum of the parts. Applying this theory to design helps create unity within a piece.

In common parlance, if we see a tail, paws, fur, a body, a collar, ears, whiskers and a nose, our brain automatically registers it as a dog.

Our brain has the ability to join parts and make a whole structure out of it. This helps us in identifying shapes of an abstract logo.

Proportion and symmetry are critical factors when it comes to creating any eye-pleasing design. Many sci-fi and mystery movies and novels make use of the Golden Ratio and the ‘Fibonacci Sequence’.

Golden Ratio can help us produce amazing patterns. God has got his math right and Everything beautiful is guided by the number of the Golden Ratio, also known as Phi (the Greek alphabet) which equals to 1.618 in all of nature.

The Golden Ratio helps in getting every design or painting right, symmetrical and pleasing to the eye. Our brains are wired to find a pattern in everything we see. We do not understand why something is perfect and looks right to us: a slight distortion, on the contrary, can signal to us that something is not quite right.

Before we jump into the amazing Golden Ratio and its incorporation in our logo with all its fantastic features, let us dig deep into the ‘Fibonacci Sequence’.

Why know such a fancy-sounding word and its meaning? Because the Fibonacci sequence is connected to understand the origin of Golden Ratio;  this one has to be known from the core.

Fibonacci Sequence is simply a set of numbers that starts with a zero or a one, followed by one, and then proceeds based on the rule that each number (called a Fibonacci number) is equal to the sum of the former two numbers.

Now, if we take this sequence and begin to divide each number by its former number, we get another pattern:

As the number gets larger, the answers start to approximate the same number, i.e., 1.618.

It is this number, the proportion, that connects any two consecutive numbers in the Fibonacci Sequence. It is commonly referred to as the Golden Ratio.

The Divine Proportion aka Golden Ratio

Now, when we create spirals that cross through each of the rectangles, we get the Golden Spiral!

So, why do these shapes matter in design? Well, it wasn’t long after these proportions were invented that people started finding them mysteriously in all things that occurred naturally.

We can witness these patterns in plants, ferns, waves, nautilus shell, the human body and even in the spiral shape of the galaxies. In fact, we attribute greater beauty to those whose faces most closely exhibit these attributes because these faces appear to be pleasing to our eyes. This ratio is so vividly present in the natural world that it has come to be known as the Divine Proportion.

We are not just surrounded by the Golden Ratio; we find it aesthetically pleasing and well balanced. Humans have always used this magic number to create and build some of the most treasured artefacts ever.

Many famous artists even made sure to incorporate Golden Ratio in their paintings to make sure that they looked attractive and did not pose out any misbalance.

Phi continues to be used profusely in modern society. Much of our technology, product, architecture, design/ergonomics are heavily influenced by Phi. Even in our logo, we made sure to incorporate to make it more attractive, expressive and ethically right on the design.

When first people learn about Golden Ratio, they try to input them in every design irrespective of the dimensions. Every line, every dimension according to them has to be a reflection of Phi. This inevitably leads to forced and cluttered designs. This is when you need to find balance in your design. Like every other thing in life, there are numerous variables which establish certain limits in our work. Phi should be best applied to fill in this aesthetic gap and get rid of these limiting factors.

You should not miss the top-performing blogs of the month: What’s the difference between Ad Agencies vs Consulting Firms? and How to Manage Business Challenges in Times of Unforeseen Emergency

Things to Learn From This Digital Fellow